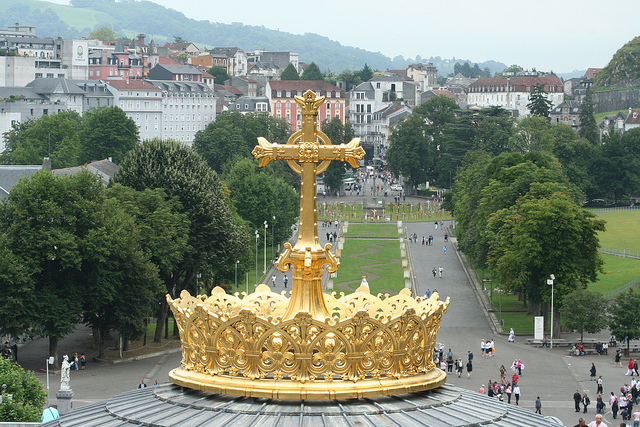 While Lourdes is well known to millions of religious pilgrims, it’s often overlooked by secular travelers. But you don’t have to believe the story of the Marian apparition, or even be religious, to enjoy a trip to Lourdes.

In case you don’t know the religious history of Lourdes, in 1858 the Virgin Mary is said to have appeared several times to a young girl named Bernadette (later Saint Bernadette). The Church determined 1862 that she had in fact seen and received messages from Mary, and the rest, as they say, is history – one which now includes a massive prayer and devotion complex that includes the grotto, churches, places to gather, and a full schedule of events for the faithful.

However, it’s not like there are people checking for some sort of secret handshake in order to be allowed to enter the grounds, appreciate the architecture and witness the phenomenon that is Lourdes. It’s a culture unto its own, and one that plays an interesting part in the larger French culture.

So with that in mind, let’s take a closer look at visiting Lourdes, and you can decide if it’s something you’d like to include on your next Southwestern France vacation itinerary.

First, read more about how to get to Lourdes and where to stay in Lourdes.

Where is Lourdes, and what’s nearby?

Lourdes is close to Spain, but separated from it by the Pyrénées mountain chain. I wouldn’t exactly call it a day trip from anywhere. That being said, with a bit of ingenuity, it can easily be added to a trip to any of these cities.

What is there to do in Lourdes?

Obviously, the Sanctuary is the big draw. Tours are available, which I recommend for understanding its place in the culture and history of both France and religion. Don’t think it’s for you? Well… have you visited the Vatican in Rome? The Hagia Sophia in Istanbul? Notre Dame in Paris? Then there’s no reason why the fantastic Rosary Basilica and the Byzantine Ukranian Church at Lourdes shouldn’t be on your list.

There’s also an 8th-century fort used by Charlemagne, which in any other town would be a stunning focal point. And being in the Pyrénées, hikers can enjoy the three summits in the surrounding area (and the lazier among us can take the funicular up to Grand Jer).

Of course, the town of Lourdes is interesting in and of itself – if only to see how a 14-year-old girl’s visions long ago transformed this place into what it is today. A stroll by the Gave de Pau river is always a joy. And there is prime people-watching, too.

When is the best time to go to Lourdes?

Weather-wise, May is the rainiest month, so keep that in mind. December is when it’s coldest, but January is not that bad and actually the driest month. The summers are mild and pleasant.

In terms of events, the town’s level of “open” is dictated by the Lourdes Sanctuary. In general, from April to October are the peak months; so much so, that some hotels close in the “off” season.