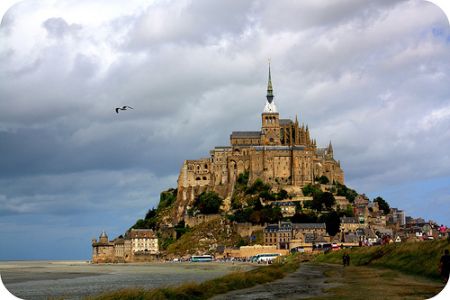 Mont Saint-Michel is one of France’s most iconic attractions and a UNESCO World Heritage Site visited by more than 3 million people annually. It is famously located on a rocky tidal island (meaning it’s an island only at high tide; however, it is always connected via causeway to the mainland) almost a mile off coast of Normandy, and about 150 miles from Paris.

6th-7th Centuries: Mont Tombe, which was the name of the islet until after the first monastery was contructed in the 8th century, was sometimes used as a military stronghold for Romano-British troops.
708: According to legend, the archangel Michael (Michel in French) appeared to St. Aubert, the bishop of Avranches, and instructed him to build a church on the tidal island. The bishop ignored the order and Michael burned a hole in the bishop’s skull. Ouch!
October 16, 709: After that, you can bet a small church was built by the Bishop of Avranches and dedicated to St.-Michel, tout de suite.
966: A community of Benedictines settled there at the request of the Duke of Normandy and built the pre-Romanesque style church. 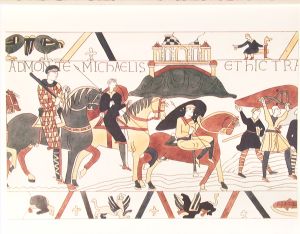 14th Century: During the Hundred Years’ War set of military installations were set up to protect Mont Saint-Michel, which enabled it to hold out against a siege lasting 30 years.
Middle Ages: The original Romanesque church, which had deteriorated, was replaced by a Gothic Flamboyant chancel in 1421. It was also during this time that Mont Saint-Michel became a center of religious and intellectual pursuits, and one of the most important destinations for Medieval pilgrims.
French Revolution: The abbey was turned into a prison and deteriorated significantly.
1979: Designated a UNESCO World Heritage Site! And rightly so. I mean, LOOK AT IT. 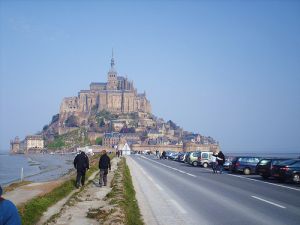 Today: Mont Saint-Michel remains one of France’s most visited attractions in France, with about 3.5 million people coming to the island every year.

At the entrance of this medieval town is the ancient Burgher’s Guardroom, which now serves as the Tourist Office. After going through the Boulevard Gate and then the fortified King’s Gate , you will find the “Grande Rue” or main street with its museums, shops and houses dating from the 15th and 16th centuries.
The Abbey
The abbey is open every day except Jan. 1, May 1 and the Dec. 25.

Mass is celebrated in the Parish church. During the week, Mass is at 7.00am (08.00am on Saturday and Sunday) and 6.30pm. You have to be 10 minutes before at the entrance of the abbey. There is no mass on Sunday afternoon and on Monday. 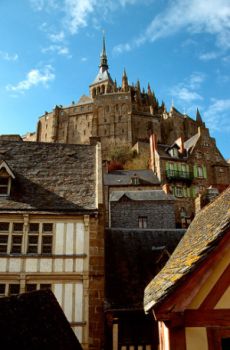 In the village that wraps around Mont Saint-Michel are touristy shops, restaurants and even a few hotels. There are three hotels within the walls, and three other sat the entrance to the causeway.

Archeocope: This museum allows visitors to learn more about the construction and history.
Museum of History: A museum featuring old collections of weapons, painting, sculptures and more. It also gives the history of the prisons and dungeons of Mont Saint-Michel as well as the chance to look through a 19th-century periscope over the Bay.
Maritime and Ecology Museum: Discover more about the tides, the bay and maritime character of Mont Saint Michel.
Tiphaine’s House: Tour the residence that Bertrand Duguesclin had built in 1365 for his wife Tiphaine including period furniture, paintings and tapestries.

The Tides at Mont Saint Michel 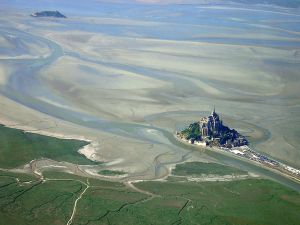 The highest tides take place 36 to 48 hours after the full and new moons. In fact, the highest tides in continental Europe take place at Mont-Saint-Michel, up to 15 meters difference between low and high water. During the top of the spring tides, the sea goes out 15 km from the coast and comes in again very quickly.
While a sea wall protects the causeway leading to the islet and is never submerged underwater, some of the parking lots do become submerged during these high tides every few weeks, so make sure you are aware of the times of the tides and where you leave your car.

Getting to Mont Saint Michel 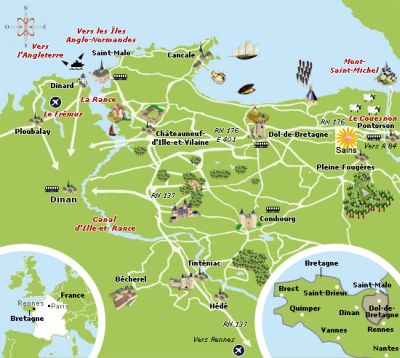 By Car
From Paris: A11 Auoroute towards Chartres-Le Mans. Exit Fougeres towards Mont Saint Michel.
From Brittany: A13 Autoroute to Rouen and Caen and then use A84 to Le Mont Saint Michel.
By Train
From Paris you can take the TGV to Rennes, about 55 km south of Mont St. Michel. The Les Courier Bretons bus makes the 75-minute transfer to Mont-St-Michel several times a day.
The train from Rennes takes you as far as Pontorson, 9km from Mont St. Michel. You can take bus #15 to Saint Michel from the station.
By Plane
While most visitors to Mont Saint Michel will come from Paris, it is possible to fly into the Rennes airport, which is located about 75 km away. There are several flights per day to many other French towns from this airport, with 70 destinations and connections.
The Dinard Pieurtuit International Airport in Saint-Malo is located about 70 km from Mont Saint-Michel, and has flights to London’s Stansted airport and the Channel islands.

If you want to stay in or very close to Mont Saint-Michel, there are a few different hotels located both within the walls on the rocky islet and at the entrance to the causeway. However, keep in mind that these hotels will likely be more expensive (high demand and proximity). With so many tourists in the village during the day, you are probably better off skipping the overpriced hotels on the islet and opting to stay nearby in a Brittany or Normandy town and visiting Mont Saint Michel as a day trip.

Hotels at the entrance of the causeway

Hotels inside the walls

Hotel Le DUGUESCLIN**
(open from the end of March until the beginning of November)
Email: hotel.duguesclin@wanadoo.fr
Website: www.hotelduguesclin.com
10 rooms from €69.