Visiting Paris in the Winter is a Great Idea 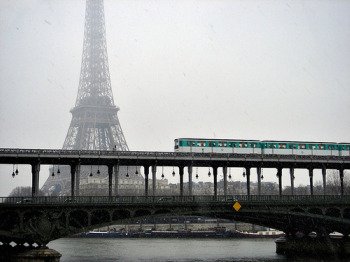 I know the song is about spending April in Paris, but that doesn’t mean it’s the only time of year to visit France’s capital city – or the best time of year, for that matter. In fact, although there’s a definite chill in the air right now, visiting Paris in the winter can make for a truly memorable holiday.

Yes, when the weather gets cold there are certain things you can’t do on your trip. Or, perhaps more accurately, there are things that may not be as glorious in the snow or the rain. A leisurely walking tour or an outdoor seat on a Seine boat tour, for instance, may get old after awhile – especially if you don’t have your warmest coat on. But any attractions that are indoors-only are not only basically the same temperature year-round, they’re usually far less crowded during the winter low season than they would be in the summer months. And if it’s just chilly but not completely foul outside, then taking a short stroll along the river (snuggled up close to your sweetie, of course) followed by a cup of hot chocolate or vin chaud at a cozy cafe sounds like a fine way to spend an afternoon to me.

Besides the off-season perk of smaller crowds – at big sights, in cafes and restaurants, and even on the streets – the other major benefit is that prices tend to be much lower during the winter than in the summer. You may see a little spike in things like Paris airfare right around the Christmas or New Years holidays, but generally speaking you’re more apt to find cheap tickets to Paris during the winter (especially while the travel industry still seems to be floundering).

Those savings you’ll get by visiting Paris in the low season also include lodging, too. If you normally wouldn’t look beyond Paris hostels because it’s such an expensive city, then this is the perfect time to expand your search. Yes, there are cheap Paris hotels that are just a step above hostels – but the truth is if you’re traveling with friends those might be cheap enough even during the high season. I’d suggest that you look at a few hotels you might think would be beyond your price range – you might be surprised by the bargains you find in the winter.

As long as you don’t mind packing a sweater or two and a scarf instead of a swimsuit and sandals, a trip to Paris in the winter is an excellent idea. Grab that Paris museum guide and go!