Why watching the Tour de France pains me 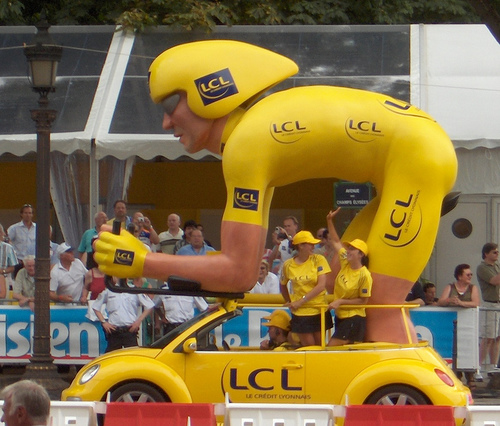 The Tour de France is well under way, which, for me, means having to rather tortuously watch cyclists whizzing by beautiful French countryside and through some of my very favorite places in France (like Annecy), rubbing in the fact that I am not in France.

I have to admit that I’m not much of a cycling fan, but I still like watching the TDF– if for nothing more than to check out the scenery (this includes both the landscapes and the men in all spandex outfits). While it is definitely too late to book a vacation to watch this year’s Tour de France, there are still some hot deals you can find on flights to and hotels in France (just in case watching the Tour convinces you that you just cannot wait until next year to go to France).

With fewer people traveling to Europe this year in light of global economic woes, rates on air tickets and hotel rooms have been cheaper than usual. In an effort to fill open seats and empty hotel rooms, many airlines and hotels have been offering pretty steeply discounted flights and cut-rate rooms. One of these such deals can be found at Concorde Hotels and Resorts, which from July 10 through September 13, 2009 will be offering up 10%-15% discounts, added amenities and a family special that allows you to save 50% on a second room at their hotels. Concorde has seven hotels in Paris alone, as well as hotels in Lyon, Toulouse and Marseille, so you’ll have plenty of different properties to choose from if you are hoping to take advantage of this deal.

While I am no longer live in Paris, it’s safe to say that I left my heart there. Paris is one of those rare and amazing cities that seems to live, breathe and change just the way its many residents do. It’s home to one of the most iconic structures in the world (the world famous Eiffel Tower of course). It has secrets, personality, history and culture. It’s featured as a character in many famous books, poems and songs, and has been the muse for art, architecture and literature. All of this, of course, makes a trip to France and Paris travel all very alluring—especially when it is so easy to score a great deal on flights to Paris right now.

While there are a ton great fares out there to France (especially if you are planning on heading there this autumn), Air France has some great fares if you are planning to travel in September or October. In fact, a quick look around their site today yielded fares like $331 each-way from Los Angeles to Nice or $257 each-way from Washington D.C. to Paris. I almost always like to fly Air France when I travel to Paris, mostly because they give out free champagne (or used to at least), but also because I’ve always had a positive travel experience with the airline.