The pre-game season of the 2011 Tour de France is upon us! While it probably won’t reach your cultural radar until after the 4th of July, the towns along the Tour de France route are already making preparations – from roadwork to sprucing up hotels all over France. Here at WhyGo France we’ve got a ton of information about the Tour de France, from spectator tips to how to get around France if you happen to be here during the race, which this year runs from July 2-24.
Almost everyone is familiar with the generalities of the race (and if you’re not, read this helpful Tour de France 101 cheat sheet), but what many people don’t know is that each year, there are some special winks and nods to the history of the Tour de France – and unique in the world of sports, they tend to change some of the rules each year. Here are several of the more interesting facts you can mention and sound really cool and knowledgable this summer. 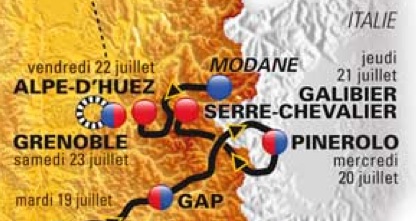 This year, the route pays homage to the first time the Tour de France went through the Alps, exactly 100 years ago. During these stages, the cyclists will even pop over into Italy for a bit, finishing stage 17 (July 20) in Pinerolo, Italy. It’s also one of the rare years in which the Tour de France rides through only one other country. Compare this to the 2009 route, which saw them ride through Spain, Andorra, Monaco and Switzerland! 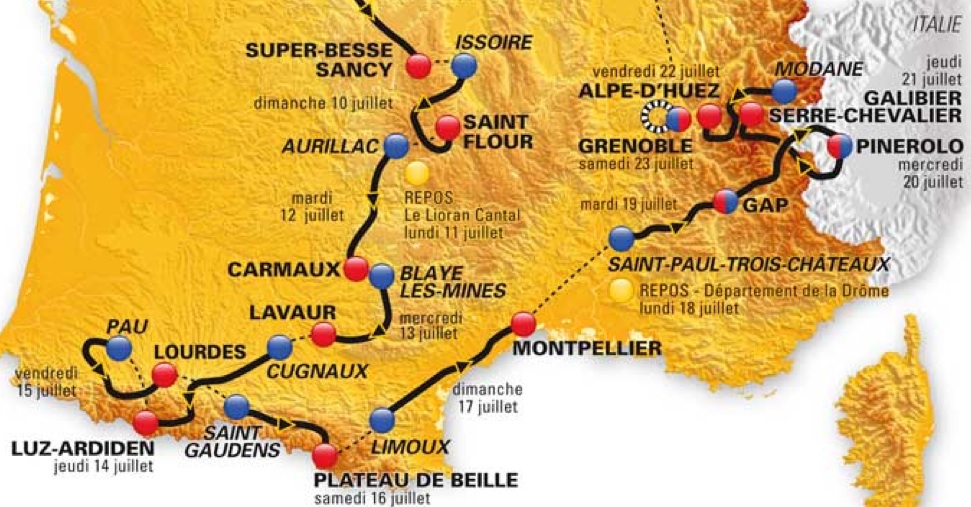 However, the Alps is not the only uphill-both-ways riding the athletes will be doing. The 2011 route visits all three major mountain ranges – the Alps, the Pyrenees and the Massif Central – located in the southern half of France, promising a punishing course with very few respites. I’m exhausted just looking at this map. 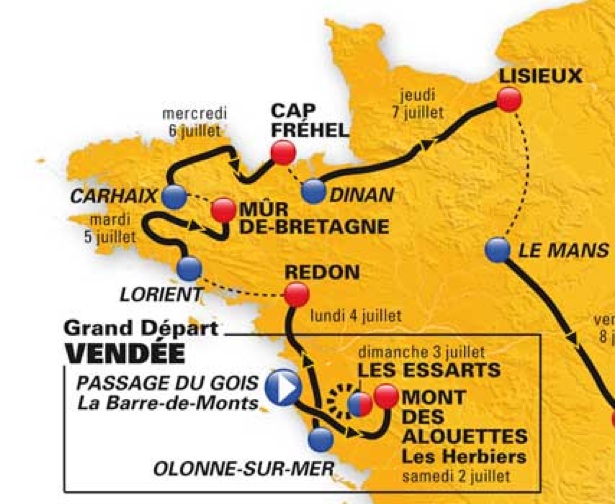 One more thing about the route – lest you think the rest of the race is a cake walk, think again. The opening stages, seen above, are in some of the harshest areas France has to offer for cyclists (although the Breton peninsula is a lovely place to escape the relentless heat of the country’s more southern climes). There can be stiff Atlantic winds along the coast, especially at the finish at Cap Fréhel, and there are uphill finishes in Mont des Alouettes and Mûr-de-Bretagne in Brittany.
The good news about all this hard work for the cyclists, though, is that it makes it easier for the rest of us to watch it, whether on TV or while cheering along the side of the road. The more brutal the route, the slower they go – which means you can actually see them ride by, as opposed to the flatlands where they whizz by in a blur and then you’re left standing on a road in the middle of nowhere with a bunch of French people.
If you’re planning a trip to France during July, or if you just want to know more about the race, check out our related posts below – and make sure to follow daily Tour de France race updates on the WhyGo France Facebook page, and on Twitter @WhyGoFrance! Allez!