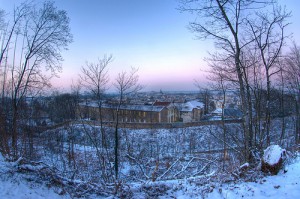 While France gets the vast majority of its annual visitors in the summer and early fall months, February can be an ideal time to visit the country.

While there are fewer festivals and special events happening during these months, it is also the best time to get deep discounts at cheap hotels in France and land incredible deals on airfare to France. It’s also a great time to breeze through short or non-existent lines at museums and other attractions. This is also the time of the year when Paris and other French towns and cities are owned by the locals, giving you the perfect opportunity to get in touch with local life in France.

Reasons to go to France in February

• Enjoy the quiet of low travel season and avoid long lines at museums and attractions
• February is the peak of the skiing season
• Low rates on lodging and airfare
• France’s centuries old Carnaval, which predates New Orleans’ Mardi Gras
• Enjoy Valentine’s Day in the most romantic city in the world

Chillier temperatures are one of the reasons you find fewer tourists in France during the winter months. While the South of France and Côte d’Azur tend to be more mild, the cold winter winds called the Mistral can even make these sunnier regions feel more on the frigid side.

Paris tends to be damp and cold in the winter, and while snow will fall occasionally, you’ll usually see temperatures hovering above 0 degrees C, or in the 40s F.

Of course, you’ll also find snowy, cold conditions in the mountains, where skiing in popular.

>>Find out more about weather in France

It is certainly no secret that Paris is one of the most romantic cities in the world, making France (especially Paris) the perfect setting for Valentine’s Day.

You’ll see plenty of Valentine’s Day specials and packages in Paris, but you can also easily make your own romance filled itinerary in Paris.

France is renowned for its world class ski resorts located high in the snowy peaks of the Alps. Val Thorens in the Alps is Europe’s highest resort; this resort has snow pack early in the season and is already near to being in full-swing by December. Chamonix and Tignes’ high elevations and year-round glaciers also make for fantastic ski conditions, especially by February.

>>Read more about skiing in France

>>Read about Carnaval in Nice, and about cheap flights to Nice.

>>For more ideas on how to enjoy France in the winter months, read Winter in France