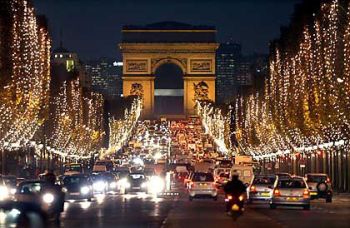 Why to Go to France in December:
While you may not immediately think of it as being a great December travel destination, the fabulous Christmas markets, sparkling cities and snow blanketed ski towns make France at this time of year a a beautiful place to go. Combine that with the fact that France is a bargain for tourists during December, and suddenly France is a magical (albeit chilly) place. Also, while maybe not superb weather-wise and temperatures in the mountains can plummet, France has relatively mild winter weather averaging from the 40s to mid 50s, and the temperatures are nothing a good winter coat, hat, gloves and a vin chaud won’t take care of (you can read my post on What to Wear in France in the Winter to get ideas on how to look stylin’ and stay warm). Whether you are doing some shopping on the illuminated Champs Elysees in Paris or hitting the slopes in the Alps, there are lots of great happenings all over the country as the French gear up to Christmas time and ring in the holiday season.

What to do in France in December:

Strasbourg Christmas Market: As the oldest (and largest) Christmas market in France, this market has been going strong for an unbelievable 431 years. If you are like me who was born and raised in the American west and where the oldest thing around dates back maybe 100 years, this centuries long tradition is nothing short of impressive. Add into the mix the Strasbourg cathedral serving as a spectacular backdrop and you are sure to be amazed. From November 29 to December 24, this market takes over the city of Strasbourg, with a host of vendors selling an unimaginable amount of crafts and La Petite France, a cozy neighborhood of timbered fairy-tale buildings with Christmas shops and a gingerbread bakery. You can shop for a huge array of Christmas goodies all while warding off the cold sipping a vin chaud (hot, spiced wine).
How to get there: Strasbourg is located in northeastern France near the German border and can be reached easily from Paris via TGV. 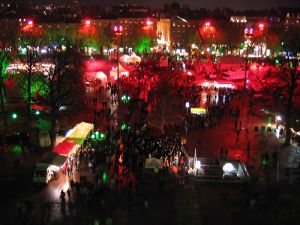 Fête des Lumières in Lyon: For four days around December 8, France’s second largest city, Lyon, lights up with large-scale installations and little candle lamps throughout the streets. With public buildings lit up in intricate designs and an array of colors by well-known artists and architects and private homes and streets lined with paper bag lamps, the city is transformed into a an illuminated urban spectacle. The festival attracts 4 million spectators to the city and along with being a witness to the spectacular lighting installations, there are also a variety of celebrations in honor of the Fête des Lumières.
Christmas Mass: France’s many glorious, beautiful and impressive cathedrals are packed for mass every Christmas Eve. Christmas Eve mass is a longtime and sacred tradition in the country. With the already stunning cathedral lit up with dozens and sometimes hundreds of candles and filled with the sounds of tradition Christmas hymns and carol, Even non-Christians can’t help but be filled with the holiday spirit at these traditional masses. The high vaulted ceilings at Gothic cathedrals like the one at Rouen or Notre Dame in Paris add to the acoustics and vibe to the mass and songs as well. The best part of the Christmas Eve mass tradition? The Reveillon feast, in which families gather after the midnight mass for a huge, late night meal with all the French Christmas specialties. 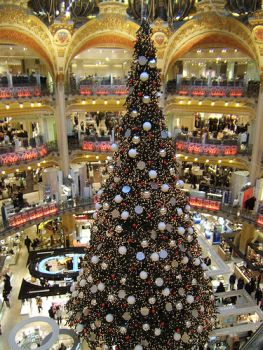 The City of Light lights up: Thy city that is always illuminated year round becomes even more lit up, beautiful and festive in December. To celebrate Christmas in Paris, little white lights decorate trees around the city, a huge Christmas tree is put up in front of the Pantheon, department stores like the Galleries Lafayette don beautiful Christmas decorations and ice rinks are set up around the city, including one in front of the Hotel de Ville.
Ski Season is just beginning: If you are looking to get a jump start on this winter’s ski season, there is no better place than to head to France. France is home to several great ski resorts that unlike many other mountains have great early season snow conditions on a regular basis. Val Thorens in the Alps is Europe’s highest resort; this resort has snow pack early in the season and is already near to in full-swing by December. Chamonix and Tignes’ high elevations and year-round glaciers also make for fantastic ski conditions in December.

Paris: Average high temperature of 45 degrees Fahrenheit/7 degrees Celsius. Averge low is 36 F/2 C. The city will see about 1-2 days of snow in the month.