The best reason to visit France in January can be summed up in one word: SOLDES. That’s “sales” in French, and it’s a fantastic way to Frenchify your wardrobe or your home for pennies on the dollar.
While nationwide regulations have relaxed within the last year or so, for the most part shops stick to the legally regulated periods during which they can offer their goods for reduced prices. So, sometime after the Epiphany, the entire country just flat out goes on sale. That’s French bureaucracy – working for you!
These sales happen in July as well, but I recommend France in January – while it can be cold, especially in the northern cities like Paris, the stores are warm and it’s the perfect excuse to spend an afternoon surrounded by your shopping bag, sipping chocolat chaud and munching on pastries. Honestly, I can’t think of a better destination for a jet-setting girls’ getaway. And I speak from experience!
>>Read more tips about shopping in France 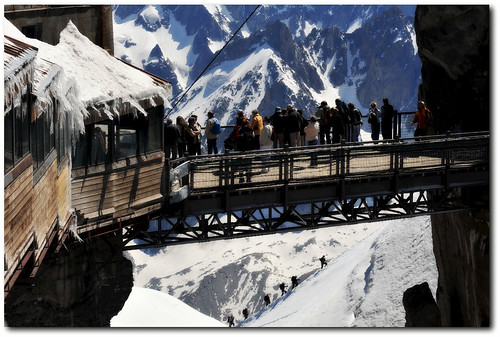 Of course, there are plenty of other reasons to visit France in January, too, for both sexes. While ski conditions hit their peak, the Christmas crowds are gone – meaning you can find great discounts at French Alpine ski resorts, especially during weekdays. Flights to France approach rock bottom after the Christmas holidays, too. And hotel discounts are popular for those willing to do a bit of research.
>>Read more about cheap flights to France, hotels in France and skiing in France
If your climate back home is particularly frigid, let me tempt you with this: It’s not unheard of to be warmed by the Mediterranean sun while sitting at an outdoor café on a spectacular winter’s day. Now, I’m not saying you’re going to be in beach wear; but you’re not going to be bundled up like the Stay-Puft Man, either. And you’ll be surrounded by locals enjoying a respite from the tourist crowds.
>>Read more about what to wear in France in the winter 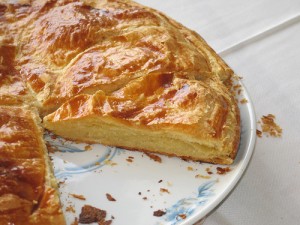 For foodies – I’m always looking out for you guys – early January in France is a delight. The Christmas holiday goes from la veille de Noël (Christmas Eve) to Épiphanie (the Epiphany, on January 8th) and during this final week, not only is France still a holiday wonderland; there’s a metric ton of galette des rois to eat.
This sweet treat varies from region to region, from a candied fruitcake to a flaky, custard-filled belly bomb. The thing they all have in common, however, is la feve (the bean) – a little something-something hidden inside. It used to be literally a raw, hard bean, but today you can find anything from small ceramic figurines to plastic babies. Tradition goes that whomever finds the prize in their slice becomes king (or queen), and is thus humiliated by being made to wear a paper crown for the duration of the night. That’s why many gallettes come with a crown in the packaging.
Of course, you don’t have to wear the crown – but it’d be a crime not to try as many gallettes as you can while you’re in France in January. Wash it down with some vin chaud (hot mulled wine) for extra good tidings.
>>Read more about French food
Hat Tips: Photo 2, Serlunar; Photo 3, Gaël Chardon