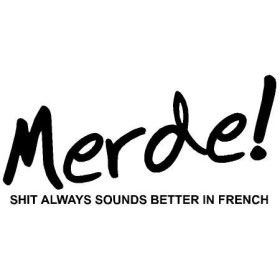 For those who learned French in the classroom, I’m guessing the teacher was not willing (or able) to teach students how to properly and thoroughly cuss in French. So, in that vein, here are some of my very favorite French curses. These are the things you hear spilling out of cab driver’s mouths, accidentally being shouted by a grandmother when she drops the milk, or accompanied by grimaced faces and occasional hand gestures in the streets of Paris.
Now, before you go around dropping the French equivalent of the F bomb on your next trip, keep in mind that language plays an immensely important role in French culture. In fact, being articulate and well spoken is considered to be an extremely valuable asset and characteristic, and while the French also like to curse a lot, the term most often associated with curse words is “unrefined.” However, in the right place, with the right people, you can impress your French friends (and make them giggle) by appropriately using these very useful and colorful curses.

1. Merde!(maird)
This translates quite literally as “shit.” You’ll definitely hear “merde” used in France in as wide of a context as “shit” in English. Sometimes, for extra emphasis, you’ll hear people say “MAIR-duuuhhhh” instead of the more accurate “maird”. 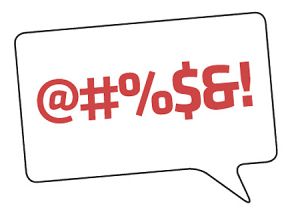 2. Putain!/Pute!(Poo-TAHN)/(poote)
This word packs a serious punch, so use it with caution (and maybe not in mixed company). Putain literally translates as “whore,” but tends to be used more like the word “fuck” in English. Not only can it be used as an emotional reaction to something, like “Fuck!” in English, you can also direct it at someone in particular, “ça pute” (that whore). People joke that the word “fuck” can be used as every part of speech in English, and in French, putain functions much the same way.
3. Chiant/ça me fait chier(CHI-ant)/(sa meh fey CHIay)
This word is most commonly used in the context of “ça me fait chier,” which translates as a more vulgar version of “that pisses me off.”
4. Salope! (sal-OPE)
You’ll most likely be directing this one at someone in particular, rather than as an angry expletive shouted in response to something. It translates as “bitch,” and is used pretty much exactly the same way the word is used in English. Also, like in English, you can incorporate this word into a a phrase like “fils de salope” (son of a bitch).
*salop (pronounced sal-OH) is the masculine version
5. Foutre/ Je m’en fou (FOO-truh)/(Juh men foo)
Again, although you may hear this dropped around a lot, use it with caution as “foutre” is the verb for “to fuck.” You’ll most often hear this in the phrase “je m’en fou,” which essentially means “I don’t give a fuck.” This also became one of my favorite phrases while I was living in Pairs and it was another one that would make my grande tante (great aunt) cringe when it slipped out at home.
6. Con/conasse/connard (cohn)/(con-ASS)/(con-ARD)
This is often used as “ass” in French, though it is also sometimes translated as a milder “idiot.” There is a famous movie in French titled “Le Dîner des Cons,” which is about a group of Parisian businessmen who each bring a “con,” or an idiot, to dinner and then the favorite “con” is chosen at the end (i.e. the guy who makes the biggest fool of himself). If this sounds familiar, it’s because it was remade in America as “Dinner for Shmucks” with Steve Carrell and Paul Rudd.
7. Nique ta mere! (neek tah mare)
Watch out for this curse, as it literally translates as “fuck your mother.” This phrase is not only extremely vulgar, but also very offensive and should be reserved for situations when only the most extreme curse is needed.
8. Ta Gueule! (ta-GOOL)
This is just about the rudest way possible of telling someone to shut up. While it does not really have an exact equivalent or translation in English, it’s kind of like saying “shut the fuck up,” or “shut your trap.” You’ll definitely hear this in banter among friends, but it can also be used in a really insulting way.
9. Casse-toi! (kass-twah)
This French curse became the center of a French controversy when President Sarkozy was caught saying this to a French citizen who had refused to shake his hand at an agricultural fair in France. This insult is kind of like a very rude way of saying “bugger off,” or maybe even “fuck off.” Combined with another expletive (like “con”), it can actually pack quite a powerful punch.
10. C’est des conneries! (Say-day-KOHN-ree)
Clearly this curse is related to #6 on this list, and can be translated best as “this is bullshit.” I particularly enjoy this phrase and find it very useful in my daily life. I also like to throw in extra words for emphasis like “C’est vraiment des conneries!” (That is REALLY bullshit).
>>Check out some of our Paris resident’s essential French swear words, too.
So, those are my favorite French swear words and cusses. You may have your own colorful expletives. What’s your favorite way to swear in French?
Also, check out these juicy posts to see what it’s like to live in France: