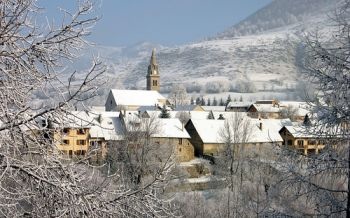 While fall in France is one of the most popular times of the year to visit—there’s the beautiful fall foliage of the Loire, the grape harvests and sunny days in the south of France—winter is also a great time to chow down baguettes, wine and hundreds of types of cheese while wearing your most fantastic sweater near a roaring fire.

Not only will you find far fewer tourists and cheaper prices on flights to France and hotels, but you’ll also have your choice of festive wintertime activities to enjoy during your visit.

From skiing in the Alps to visiting the Christmas Markets, winter is an ideal time to enjoy France—just make sure you bundle up!

>>Read more on what to wear in France in the winter.

Getting to France in the Winter

Winter is a great time to enjoy cheaper prices in France. While you will often see a hike in prices right around New Year’s in Paris, most of the winter months offer deep discounts on everything from your France airfare to your hotel in France.

But, while there are more festivals and events happening in December and the beginning of January for the holiday season, this is also when you’ll find steeper airfares and room rates at hotels. If you are hoping to go during the cheapest time of the year, January and February are usually the best months of the year to visit the city (and you can still totally take advantage of the winter sale season).

January in particular is fun, as it’s the time of the twice-yearly state-sanctioned sales nationwide – the entire country literally is like 30-60% off. (The other month is July, FYI.) If you love shopping and your dream is to come back from vacation with an extra suitcase full of French clothing – without hip-checking a bunch of tourists out of your way – January is your month.

One of the reasons you’ll find fewer tourists in France during the winter months is that the temperatures do dip down a bit. The South of France and Côte d’Azur can be pretty mild, but the cold winter winds (called the Mistral and spoken of in hushed, superstitious tones) can even make these sunnier regions on the frigid side.

Paris tends to be damp and cold in the winter, which makes it even easier for you to spend the afternoon over a mulled wine (vin chaud)or chocolat chaud in a cafe or warming your hands with a Nutella crepe. Snow will fall occasionally, but you’ll usually see temperatures hovering above 0 degrees C, or in the 40s.

Of course, you’ll also find snowy, cold conditions in the mountains, where skiing in popular.

>>Find out more about weather in France

What To Do in France in the Winter

Beginning at the strike of midnight on the 3rd Thursday of every November, France welcomes the arrival of the Beaujolais Nouveau for the year with celebrations that start at midnight and last well into the following day. Cafes, wine bars and bistros in many of the cities stay open late into the night for revelers who can’t wait to get their hands on this year’s new wine.

Go to the Fête des Lumières in Lyon

For four days surrounding December 8, France’s second largest city, Lyon, lights up. With public buildings lit up in intricate designs in an array of colors by well-known artists and architects, and private homes and streets lined with paper bag lamps, the city is transformed into an illuminated urban spectacle. The festival attracts four million spectators to the city and along with being a witness to the spectacular lighting installations, there are also a variety of celebrations in honor of the Fête des Lumières.

>>Read more about Lyon
>>There’s plenty more things to do in Lyon, too!
>>Find out which budget airlines fly to Lyon
>>Italy on your list? Read about how to get from Lyon to Milan

Shop at the Strasbourg Christmas Market

Going strong for the past 431 years, the Strasbourg Christmas Market is both the oldest and largest Christmas market in France. Add into the mix the Strasbourg cathedral serving as a spectacular backdrop and you are sure to be amazed.

From November 29 to December 24, this market takes over the city of Strasbourg, with a host of vendors selling an unimaginable amount of crafts and La Petite France, a cozy neighborhood of timbered fairy-tale buildings with Christmas shops and a gingerbread bakery. You can shop for a huge array of Christmas goodies all while warding off the cold sipping a vin chaud (hot, spiced wine).

How to get there: Strasbourg is located in northeastern France near the German border and can be reached easily from Paris via TGV. Read more about Transportation in France.

Ski in the Alps

France is renowned for it’s world class ski resorts located high in the snowy peaks of the Alps. Val Thorens in the Alps is Europe’s highest resort; this resort has snow pack early in the season and is already near to in full-swing by December. Chamonix and Tignes’ high elevations and year-round glaciers also make for fantastic ski conditions starting in December as well.

>>Read more about skiing in France

While the holiday season in France still sees a fair number of visitors, February and March tend to be among the quietest months in the country. While there are fewer celebrations, festivals and special events happening during these months, it is also a great time to breeze through short or non-existent lines at museums and other attractions. This is also the time of the year when Paris and other French towns and cities are owned by the locals, giving you the perfect opportunity to get more in touch with local life in France.

Other Useful Information about France in the Winter: